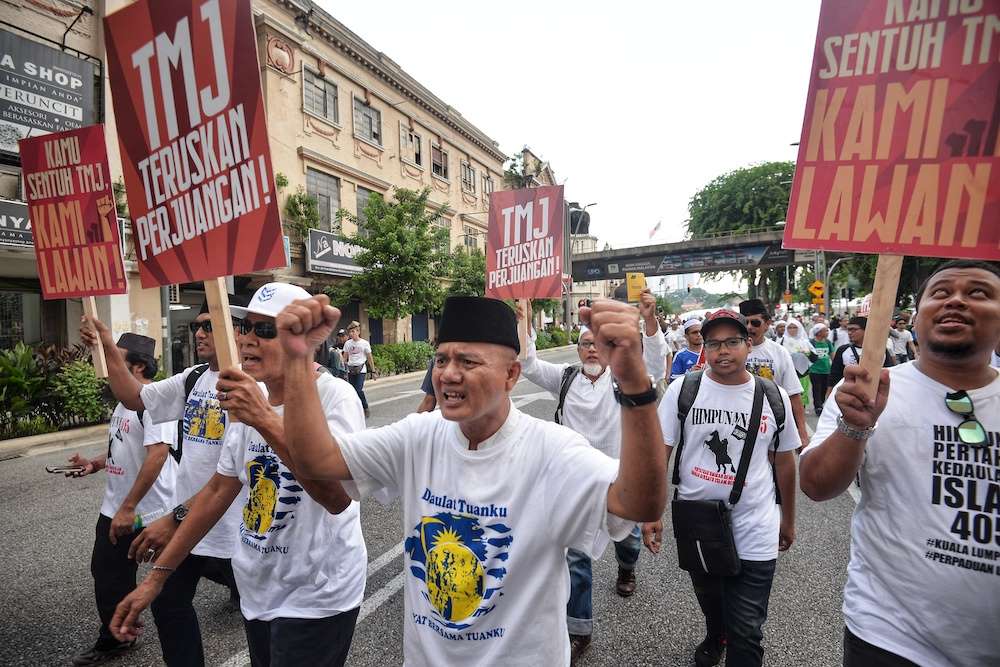 (This article was published on 6 May 2019 on #Liberasi and Malaysiakini.)

About one to two thousand people gathered on the streets of Masjid Jamek in the afternoon of May 4th to “defend the sovereignty of Islam”. UMNO and PAS politicians appeared alongside NGOs like Ummah, ISMA and Sedar to give speeches. Plenty of signs and placards supporting The Crown Prince of Johore were also visible at the rally. Unfortunately, it had to end one and a half hour earlier due to a downpour.

While the freedom of expression is to be celebrated, a non-Malay Muslim onlooker such as myself cannot help but to ask if the “sovereignty of Islam” was so threatened to a point that it has to be “defended”.

The last time I checked, Islam is still the official religion of Malaysia as per the Federal Constitution. Islam and the interests of Muslims remains to be safeguarded by the monarchy, where the Yang Di-pertuan Agong is the Head of Islam for the four states ruled by governors, including the federal territories and His Majesty’s own state. Other states shall have their own State Rulers as their Head of Islam.

On top of that, all states have their own set of syariah state laws and Islamic state agencies to enforce them. The federal territories are governed separately by federal laws but shall have Islamic agencies to enforce these laws within their jurisdiction. In addition, other faiths may be practiced by non-Muslims in peace and harmony throughout the Federation but proselytizing any faith other than Islam to a Muslim is a crime in all states.

As far as “Malay rights” are (the proper term would be “special position” rather than “rights”, as the latter is absent from the Federal Constitution) concerned, Article 153 of the Federal Constitution still exists to provide for the special position of Malays and natives of Sabah and Sarawak. Needless to say, there still exists an extensive legal structure to safeguard the interests of Islam and Muslims. The status of Islam and the special position of Malays are more defensible than threatened.

So why were these people protesting? Perhaps some of us have already labelled the rally-goers as being bigoted racists who truly wished for their non-Malay, non-Muslim countrymen to perish in hellfire. But I think the reason why the organisers have managed to mobilise thousands for this rally and tens of thousands in the previous anti-ICERD rally stems from misinformation and our collective failure at tackling it.

The main issues raised at the rally were dangerously premised upon uncorroborated claims and rhetoric. As usual, international human rights treaties such as the Rome Statute and the International Convention on the Elimination of All Forms of Racial Discrimination (ICERD) were deemed as foreign threats to the monarchy, the special position of Malays and Islam despite what the Federal Constitution says. The incumbent Attorney-General Tommy Thomas, on the other hand, was called to resign on grounds that he had allowed the monarchy to be insulted, as if it is the role of the AG to shield the monarchy from insults in the first place. There are existing laws in place such as the Communications & Multimedia Act 1998 which is already being used to investigate and charge individuals critical of the monarchy.

Issues which have nothing to do race or religion were conflated into one that does. For instance, some had claimed that the delay in delivering justice for deceased fireman Muhammad Adib were due to the government’s attempts to ‘cover up’ the real cause of the deceased’s death in order to protect the Indian assailants. This is a serious claim which we are unable to verify without proof. What we do know, however, is that the Seafield temple riot was never triggered out of racial hatred but a land dispute between a developer and the temple’s management.

Never mind if these were harmless banter, which they were not. The leaders of the rally lacked tact, were dishonest and irresponsible for misinforming their supporters. I am fully convinced that the politicians and religious leaders who spoke at the rally knew exactly what they were telling the crowd. They were willing to lie through their teeths when they spoke of threats which, in actual fact, do not exist. They knew exactly what to say to touch the deep-seated insecurities, faulty assumptions and biases held against other races and religion which have been planted in the minds of the rally-goers after decades of indoctrination by the previous administration.

Imagine being a Malay Muslim who is struggling to find employment and is then told that your struggle is caused by DAP who is taking away jobs supposedly allocated for the Malays in order to give it to the Chinese. A Malay Muslim who understands his special position under the Federal Constitution would find this to be far-fetched, if not probe further to find out if the claim is true. But to one who knows little to none, it seems like a probable explanation that warrants a fearful response to ‘threat’.

This illustration was, of course, never intended to single out the Malay Muslims. Anyone can be susceptible to this – our brains are wired to seek information that validates our pre-existing beliefs and to avoid those that conflict with them. The difference lies in whether a person is aware of the biases or faulty assumptions they hold in their minds and if they seek to actively challenge them.

In any case, the only people who made real gains out of this rally are those who are so desperate to consolidate political power and gain relevancy as ‘saviours’ of the Malay Muslims. But for whom? Not for God, but for themselves. The rally was essentially a protest against manufactured threats – they do not exist and neither does a genuine care for Islam or Muslims.

If the organisers have cared so much, it could have been a solidarity rally for Muslim minorities who are being persecuted around the world such as the Uighurs, Rohingyas and Palestinian Muslims. Even in our own backyard, there are plenty of real issues affecting the welfare of Muslims that they could protest about. Instead, they have chosen to protest in defence of the position of the majority which is more than well-secured in this country. Talk about privilege!

That being said, one should not be too quick to dismiss those who are sympathetic to the cause. The rally may not be representative of the entire Malay Muslim population but the large number of participation in the rally itself is indicative of a growing unrest that poses numerous challenges to the efforts of reforming Malaysia.

Instead of letting this polarise us further, progressive Malaysians must continue to attempt at engaging the other side of the political spectrum. Sure, discussing topics like these will be difficult as the racial and religious divide has become so entrenched over the decades. It is only through such engagements that we are able to challenge one another’s assumptions and biases in order to dissolve the racial-religious divide.

About Me: Michelle Liu